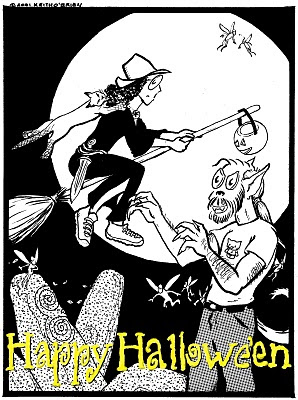 Posted by Postmaster at 5:14 PM No comments: 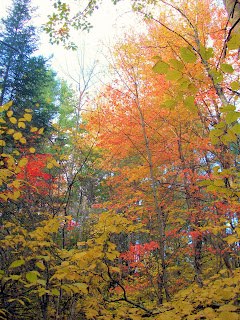 The photo to the left was taken on a recent stroll through the woods on our property.

The picture below is the view of our front yard from the bay window in the studio.

Click on each picture to get a bigger, more glorious view of fall foliage. 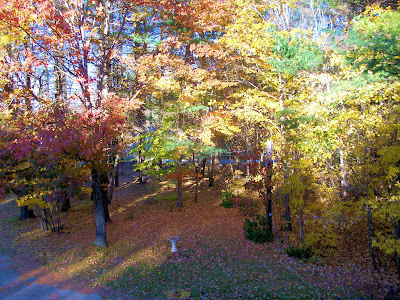 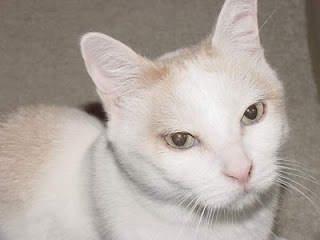 The last couple of months we could see he was getting bonier and more feeble. We were bringing him into the vet's a bit more often and were slowly transitioning him from dry food to wet. Which he liked very much. We had him on medications and even had him at the vet's on Saturday, but the two cancerous tumors in his head were too much for him.

Sunday Carrie and I were taking turns watching him, mostly because he no longer had a good sense of balance, but also to make certain the other pets didn't pester him. He was always seeking out the company of humans, even if we didn't do anything with him, he still liked to be with us.

Around 1996 or so there was a yearling white cat hanging around behind the cotton lab near where Carrie was working. One of her coworkers picked up this lovable kitty and brought him to the vet for shots and stuff. She was going to just let him go. Carrie said we'd try and find a home for him instead. Unfortunately, we couldn't find anybody to take him. The only people interested in getting a cat we could find at that time wanted kittens. 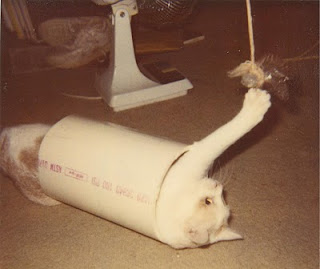 I say unfortunately, but I mean it was unfortunate for the people who turned him down. We ended up being very happy to be "stuck" with him. And why did they want a kitten anyway? Was it because they are so cute and playful? Weevil was that all his life. In fact, I used his love of play to overcome his fear of being covered. He didn't like being inside boxes or anything like that. But after a bit of play therapy, he eagerly climbed into and under things, waiting for us to bring him a bit of play.

It was probably good for him to be stuck with us, not just because we're good parents, but because Carrie and I both have respiratory problems and were very sympathetic to Weevil's. He had a slightly runny eye (sometimes squinting with it to look like Popeye) and sneezed a lot. If only we could have taught him to use kleenex, we would have saved a lot of cleanup time. 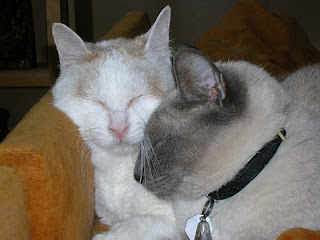 Sunday we spent a lot of time with him and started talking about quality of life. He was having trouble even just walking with the tumors throwing off his sense of balance, and he was no longer in control of his bladder. But we discovered Monday morning he spared us making that decision by moving on.


I'll be doing a bit of digging up on the hill behind our house. We miss him already. 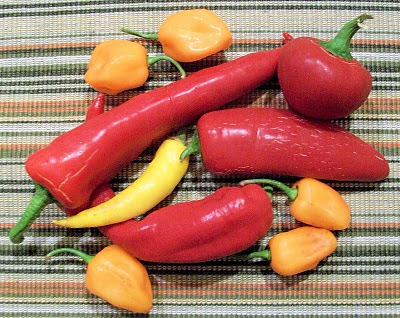 A coworker brought in some habanero peppers recently. (The small orange ones.) After noting how happy I was at the prospect of trying them, another coworker brought me a selection of peppers from her garden.
.
I took a very small nibble of the habanero, knowing their reputation for heat, and got nothing. I took a bigger nibble and felt it. Not enough to go running for coolant, but enough to know a full bite would have been difficult. No flavor to speak of.
.
The largest of the group is the sugar chili. My coworker tells me that the crop this year is extremely variable in its heat level. I ate this one plain with no heat felt at all. Pleasant, but not strong flavor. A little sweeter than usual.
.
The yellow one, ho Chi Minh, is supposed to be the hottest of the group after the habanero. Slightly sour taste, no heat.
.
The round one, cherry, has a nice fruity taste and heat that accumulates. My first bite held no heat, but by the time I finished it my mouth was fully in flame. Yum!
.
The fat red one is the chilipeno. No heat, mild flavor.
.
The curly red one is the Portugal. Slightly fruity taste, not so much as the cherry. Heat was evident right from the start and lingered on for a while afterward.
.
Not shown are the bell peppers Carrie is growing for me. I like those in sandwiches.
Posted by Postmaster at 5:30 AM 2 comments: