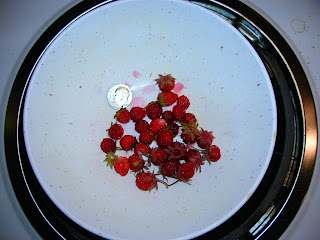 Guessing that people might be a bit tired about our house hunting trials, I thought I might blog something different. Earlier Keith mentioned "Strawberry Fields for Driveways" and on facebook I mentioned having wild strawberry pancakes. It is, indeed, strawberry season here. Not only are there plenty of wild strawberries in our yard, but roadside stands selling native strawberries are popping up and they're a big feature at farmers' markets. Given that it takes a lot of time to pick and clean the tiny wild strawberries, I'm thinking of trying the local domestic variety.
Posted by Park Ranger at 7:33 PM No comments: 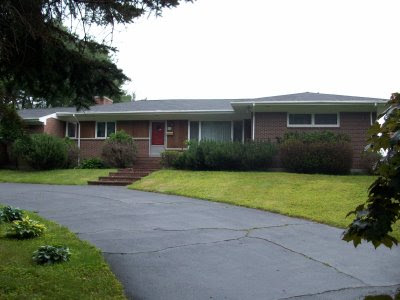 We think we'll be able to get this house. The price has already dropped into our acceptable range, it's been on the market for two years, and we know of no other people interested in it. We've put in a bid and will now wait for the counter offer. The difficulty will probably be in that it is currently jointly owned by four siblings.

Meanwhile, our bank has sent us an automated denial letter based on our empty credit history. We, by choice, don't have credit cards and have only borrowed money once before. That was to buy our previous house, and we paid that off in about seven years and that was ten years ago. Basic credit reports don't go back that far. We're trying to see if our bank won't do a real credit check to see we actually have enough in cash and other assets to buy the house outright as well as how reliably we pay our rent, utilities, etc. If they won't do that, we have a couple of recommended mortgage people as well as going to the Maine State Employee Credit Union (who I will be calling tomorrow.)
Posted by Postmaster at 7:15 PM No comments:

We placed a bid on the Auburn house, but it, and the two that came in from others, was rejected. We placed a higher bid. It was rejected and we were told it was way below the other two bids. So, on to the other houses we were interested in.

As mentioned before, there were four places we liked. One was under contract even as we were contemplating the one we got outbid on. Another had its price go up and then it got rented out. So that leaves us with one. 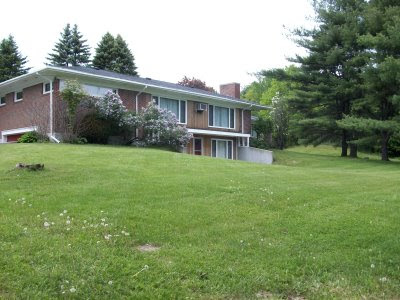 The photo above shows the back of our new hope. It is in good enough shape to move right into, though we would prefer to replace the living room's shag carpet first, if only because it's in such sorry shape. We're going to take a second look at it tomorrow. 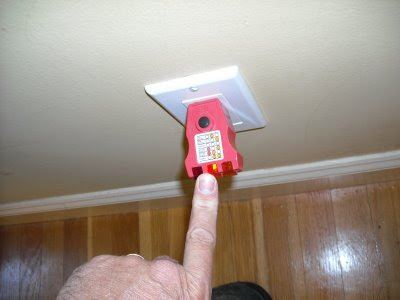 Posted by Postmaster at 12:05 PM No comments: 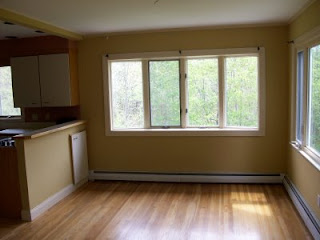 Another shot of the same room, but the dining part of it. The kitchen is just to the left and the back yard is just beyond the window.

So, the inspector report shows mold is not a problem. It also showed the problems we knew about, a couple of which are worse than we thought. For instance, not only does the roof need to be redone, it needs to be redone before winter (we'd hoped to put it off a year), the vents are leaking, and the rafters need extra support. The other possibly big problem we didn't spot is that the new furnace system not only isn't hooked up to the whole house, but it couldn't be started.

There are a lot of relatively minor things that, if it wasn't such a well built house to start with, would certainly have made us leery of purchase. But the inspector, as well as the contractor we had in earlier, both thought very highly of the structure. We'd looked at some houses that needed less work, but were not really worth the extra effort to fix up. We think this one is.

The bank just recently dropped the asking price which got more people interested in it. There are some who are already talking with the bank about buying it. We didn't have all our price quotes for repairs in yet, but we put together what we had with our bid for the house. We need to hope that it is high enough and our ability to close quickly (because we don't have to sell a house to raise the money and have already done an inspection so won't have an inspector escape clause) will be enough to get the house.
Posted by Postmaster at 6:36 AM 2 comments:

Waiting For A Go 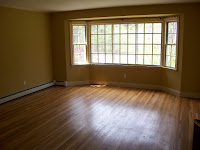 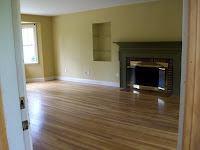 Our real estate agent gives us hope that we might actually be able to get this place. She says the agent for the bank is keen to get rid of it, and has tried to convince the bank previously to let it go cheaply. He encourages us to get a detailed list of repairs to put with our bid to help the case. We have been pricing out some things like replacing the carpeted basement floor, but the first big thing to do is get the house inspected so we can get a detailed list of what's wrong. If there's mold, we stop and walk away. If not, we start contacting all the contractors about written estimates. Wednesday is the inspection.

Pictures this time are of the upstairs living room.
Posted by Postmaster at 6:52 AM 4 comments: 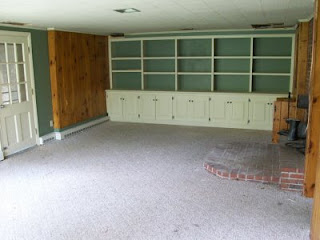 We heard that a previous offer of more than our maximum on the house we want had been turned down. We're going to talk to our real estate agent about strategies, including moving on to another possible house. We still might try for this one, depending partly on how long ago that bid was put in. If we do try, we're going to need to put together a detailed list of all the repairs and replacements the property needs, with estimated costs, to put in with our super low bid. Will it be more work and cost than the slim chance it will get us the house warrants? We'll see what the agent thinks.

The room pictured here is the family room in the walkout basement. The previous owners took the wood stove that was on the brick base when they left.
Posted by Postmaster at 8:21 AM No comments:

Is There A House Doctor In? 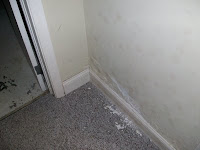 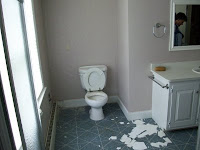 Our realtor finally got info on house repairs from the contractor who had gone to look at the property we are thinking about. The answers are a little vague on a couple of things, but overall, if the bank will accept a pretty low bid, we would buy it and sink about as much into fixing the house as we are putting as a down payment. 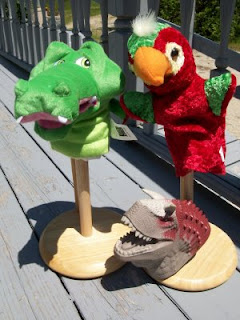 This morning we went to the big yard sale in Gray. A spot on the TV last night noted that they had more than 6,000 people show up last time. This time the police had to come in and handle the traffic. I also heard one booth operator say the police had closed the place down, but we saw people still walking in as we were leaving.
The stuff we bought included some hand puppets and a couple of paper towel holders to put them on.

Click on the parrot's beak to enlarge the photo.
Posted by Postmaster at 1:07 PM No comments: 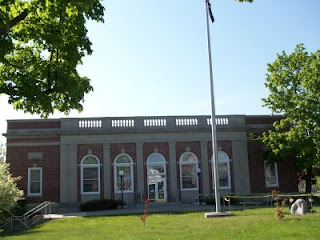 I was feeling a little under the weather last Sunday and went to another week of training up in Orono feeling quite sick. Between whatever it was I caught, being anxious about training, and being away from home again, I spent a lot of time in the bathroom this week. It's now Friday night, I'm home, and feeling much better. 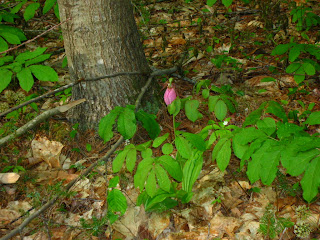 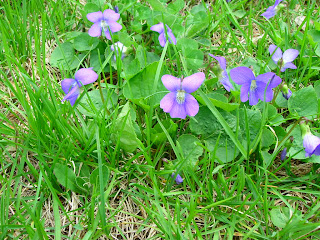 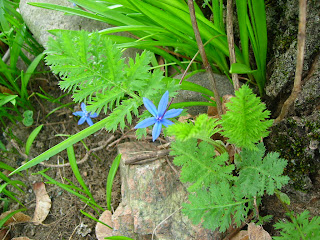 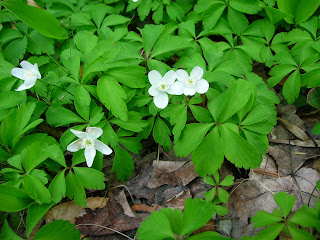 Spring advances here in the north. The tulips, daffodils, and flowering trees that put on quite a show last month and before are spent. The woods, meadows, and just the lawn still abound with blossoms: strawberries, dandelions, clover, violets, cinquefoil, bunchberries, and pink lady's slipper. There's stuff I've never seen before, in spite of having been born in the midwest. Stay tuned for more flower power!
Posted by Park Ranger at 7:04 PM 2 comments: