Another yard sale find were these 10 comics for 25 cents each. Tarzan, which is in the worst condition of them all, was the second best find. I collect Tarzan comics but didn't know if I had this one or not. Turns out I don't. With that in mind, in spite of its condition, I would have paid more for this one comic than I did for the lot.

Brothers of the Spear is another series I collect, but in this case I already had this issue.

Best find was Secret Agent #1. I never thought I would actually get to own this. There were only two issues and they are generally priced beyond my perceived value, so I am very pleased.

Posted by Postmaster at 12:29 PM No comments: 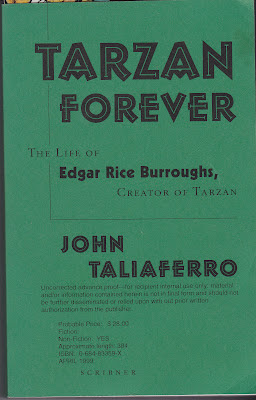 As mentioned earlier, I have been buying books at yard sales, flea markets, and the like. The first one shown here is an advance proof of a biography of one of my favorite authors, Edgar Rice Burroughs. First biography of his I've ever read, let alone bought. Odd, considering what a Tarzan fan I am.

And don't forget, in honor of Tarzan's 100th anniversary, there is a new postage stamp coming out on August 17th. 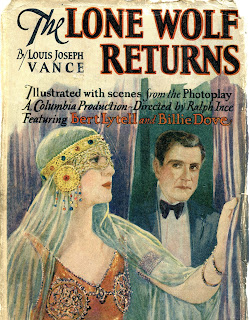 In my earlier post about books, I mentioned a yard sale I bought the 1800's dime novels at. I went back this weekend and found two Lone Wolf novels. Earlier this year I discovered reruns of the old b&w tv show based on the series and a few months ago TCM was showing some of the movies. Both these books feature "scenes from the photoplay". The second book had the front half of the dust jacket tucked inside of it. No dust jacket for the other one. 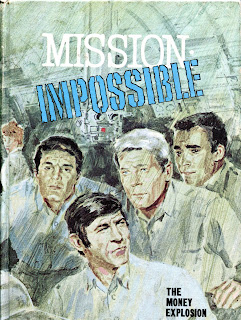 There are a couple of tv series from my childhood that I actively seek books from. But for some reason I've decided to pick up other tv themed books. I won't get just any. I turned down Lassie and Dr Kildare ones offered. But recent purchases include Land of the Giants, Voyage to the Bottom of the Sea, and Mission: Impossible. Never high literature, but usually fun nostalgia. 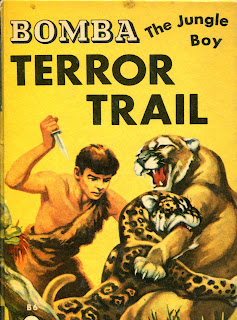 As a child I also watched a lot of old movies. That's where my love of Tarzan started. The actor who played Boy in those films went on to star in a series of movies based on the Bomba books. I have long wanted to read one of them, but not been willing to pay the antiquarian bookstore prices of the only copies I'd ever come across. Well, a recent find at a flea market was one from that series in hardcover with dust jacket mostly intact. At only three dollars, I snatched it up. It was about the level of writing I was expecting and felt no need to buy any others. Until I found two more at a buck each.

to enlarge any image, click on the author's favorite word

Posted by Postmaster at 9:09 AM No comments: 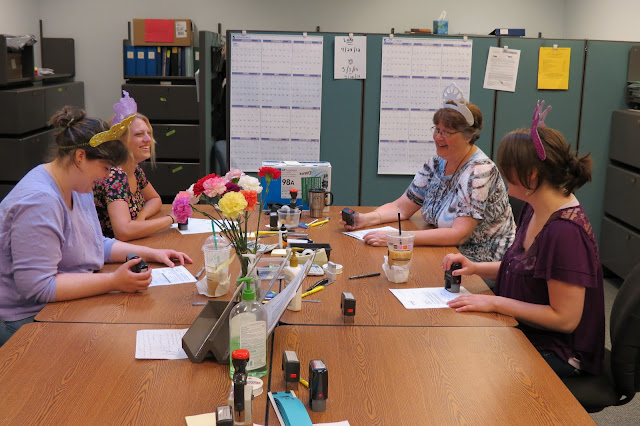 Kemmer Tiara Day at the Maine Department of Labor
Posted by Postmaster at 5:42 AM No comments:

Carrie noticed that the public library in Turner was having a book sale today, so we decided that was what we would do for our day off. When we arrived in town we noticed the sides of the main street were packed with people. They were getting ready for a parade. We barely managed to get in the general area of the library before all available parking was gone. The sale was in the basement of the library itself, and very well attended. We both got several books, and one of my purchases was another boy's adventure novel from the 30s. 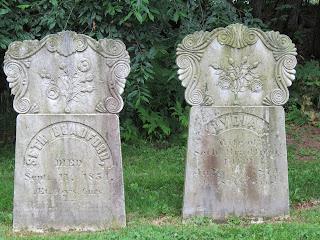 After we left the building we realized leaving wasn't going to happen soon, so we went across the street to check out the cemetery. A few headstones had artwork, most of which featured roses. There were also some that had fancy shapes like these two. While we were here, the parade started. 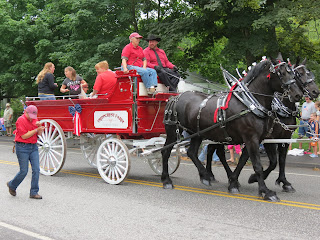 They had horses, tractors, classic cars, fire engines, and hookers. 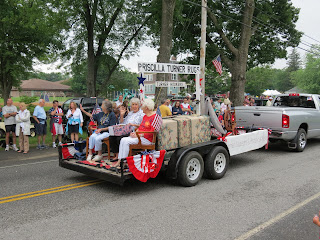 Posted by Postmaster at 12:59 PM No comments: